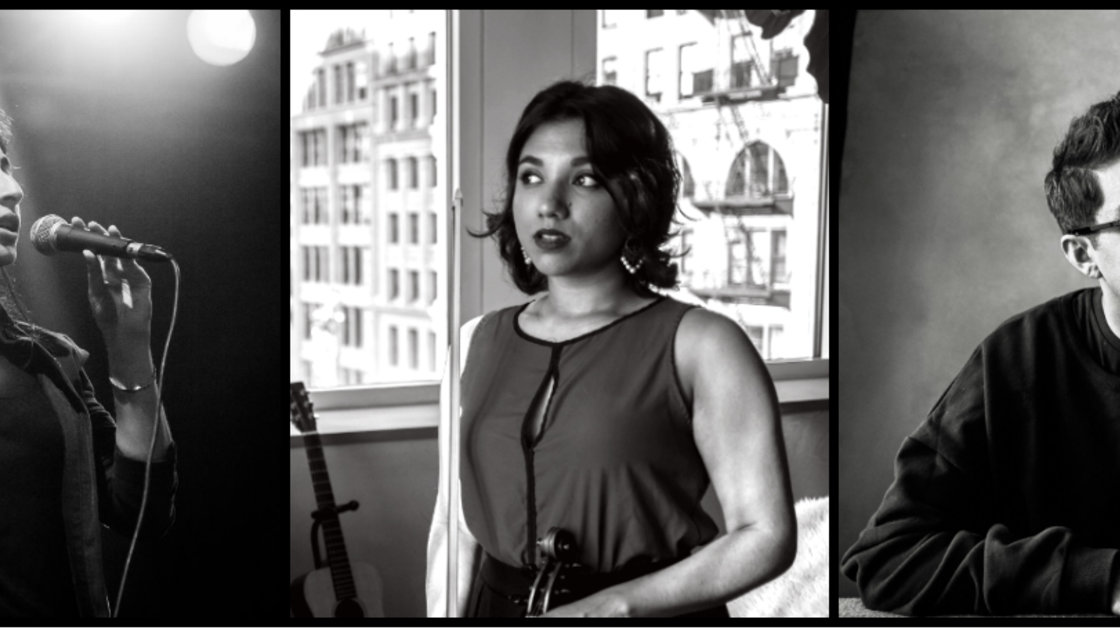 An evening of improvised music by three South Asian American musicians, each of whom brings intentionality, play and expression to exploring their unique musical traditions and idioms in conjunction with creative music. Their shared sound takes inspiration from Raga music, Sufi music, jazz, rock, electronic music and everywhere in between.

Anjna Swaminathan is a versatile violinist, composer, and multidisciplinary artist. A disciple of the late violin maestro M.S. Gopalakrishnan and H.K. Narasimhamurthy, she performs regularly in Carnatic, Hindustani and creative music settings. Her current mentors include Samarth Nagarkar (Hindustani music) and T.M. Krishna (Carnatic music). In the summer of 2014, Anjna was a participant at the celebrated Banff International Workshop in Jazz and Creative Music, where she worked closely with eminent jazz and creative musicians, and led workshops on Carnatic music.

Paying homage to classical Sufi legends such as Abida Parveen and Reshma; neo-soul and jazz icons such as Sade and Ella Fitzgerald; and contemporary world musicians such as Marisa Monte and Fat Freddy’s Drop, Aftab presents an original, interactive sound embraced by young and old, South Asian and beyond.

Heralded as "one of the most intriguing figures in music today" by the New York Times, composer, producer, and guitarist Rafiq Bhatia's music reconciles meticulous sound art with mercurial improvisation to deliver searing emotional intensity. His second album, Breaking English (2018, ANTI-) reveals "a stunningly focused new sound" (Chicago Reader) that is "mesmerizing" (XLR8R), "dark, powerful, inventive" (Stereogum), and "a thoroughly engaging experimental enterprise" (Wall Street Journal). "A guitarist who refuses to be pinned down to one genre, culture, or instrument" (New York Times), Bhatia is a member of the band Son Lux, and has appeared on recordings or in performance with artists across disciplines including Olga Bell, Sam Dew, Marcus Gilmore, Billy Hart, Heems, Helado Negro, Vijay Iyer, Lorde, Valgeir Sigurðsson, Sufjan Stevens, Moses Sumney, David Virelles, and numerous others.