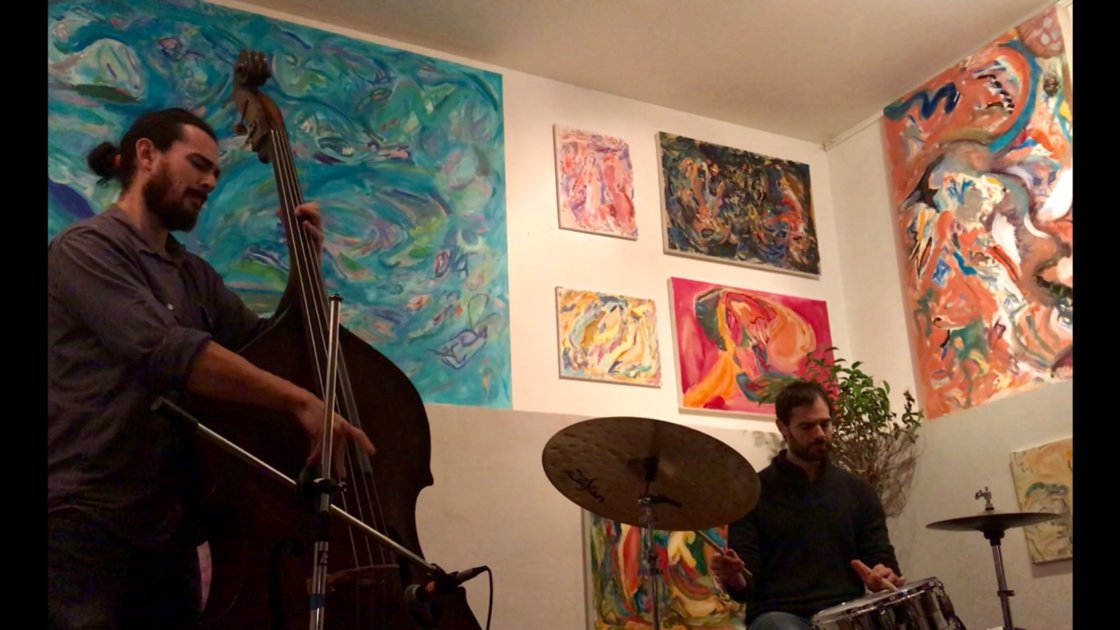 The duo of drummer Dan Weiss and bassist Michael Gam brings together two expansive musicians guided by a deep love and unique commitment to two profound improvisational musical traditions - Jazz and Indian Classical music. Both musicians have been dedicated practitioners of their respective instruments within the context of Jazz and other styles for many years while also studying and performing Indian Classical music. Weiss has studied tabla for 20 years with Pandit Samir Chatterjee and recorded two groundbreaking albums translating tabla repertoire to the drum set. In addition to his work as an upright and electric bassist, Gam is an emerging Hindustani (North Indian) sarod performer who began his studies with the late maestro Ustad Ali Akbar Khan in 2008 and has also been committed to developing a new approach to the bass informed by Indian Classical music. Join us for an exciting improvisational journey with this innovative drums and bass duo.

Shifting Foundation grantee Dan Weiss has been hailed as one of the top five jazz drummers in The New York Times, and his large ensemble recording "Fourteen" made the top ten list of their best recordings of 2014. Weiss’s innovative drumming and forward thinking compositions have been pushing musical limits for years.

Weiss has been studying tabla under Pandit Samir Chatterjee for twenty years. He has performed with the legendary Ashish Khan and Ramesh Misra and recorded a solo tabla cd "3dcd" (2007). Weiss recorded two groundbreaking CDs "Teental Drumset Solo" (2005) and "Jhaptal Drumset Solo" (2011) where he performs classical Indian repertoire on a drum set.

Michael Gam is a jazz bassist, multi-instrumentalist, vocalist and composer based in New York City in the lineage of the Ray Brown and Ali Akbar Khan. As an experienced, skillful and intuitive jazz improviser, Michael has worked extensively alongside respected elder jazz musicians and young innovators, while also being called upon regularly to play bass in a variety of other musical worlds ranging from R&B, classical, bluegrass and rock to Afro-Peruvian, Cuban, Klezmer and West African music. Since 2009, Michael has been a student of the rich musical tradition of Raga and is an emerging Sarod and Sarangi performer of the Maihar gharana.