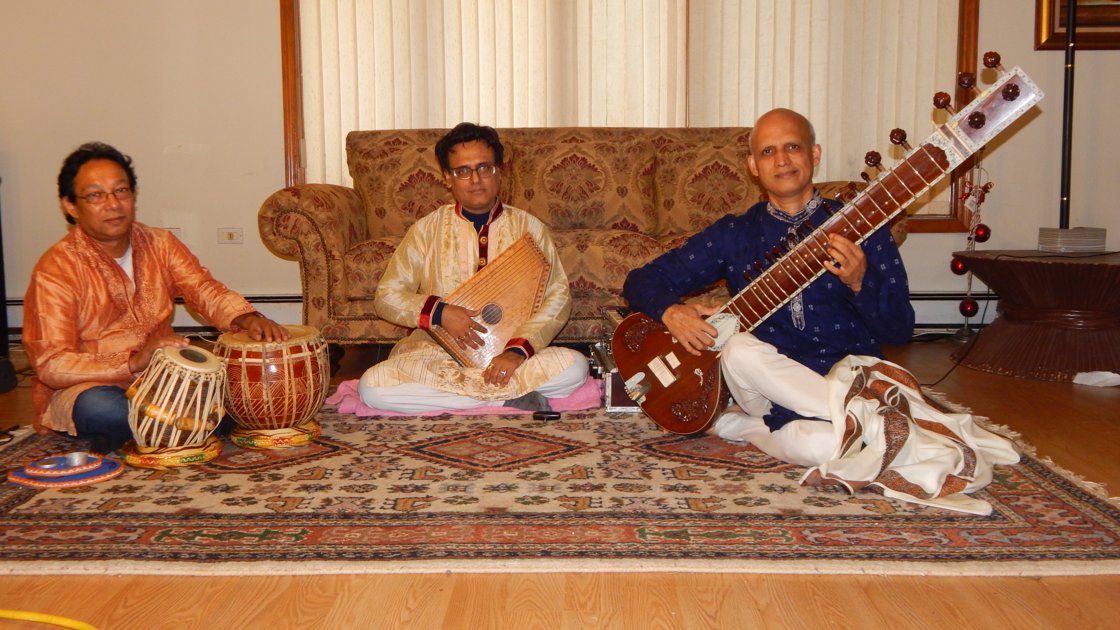 Hindustani classical performance features a rare jugalbandi of vocal and sitar. The sonorous vocals of Amit Chakraborty and the tuneful sitar of Ravi Rao will be accompanied by Polash Gomes on tabla.

Originally from Kolkota, Amit Chakraborty grew up in a musical atmosphere, beginning his studies in Gostha Bihari Sangeet Sikhayatan (a well-known music school). His dynamic and philosophical style of singing is the result of his extensive training under many gurus. Chakraborty has been lucky to train primarily under Vidushi Chameli Roy, Ustad Raza Ali Khan, Pandit Karunamoy Das, Prof Sukumar Moitra, and Ustad Hussain Bakhsh Gullu.
He was awarded the prestigious “Sangeet Bhusan” from Pracheen Kala Kendra (Chandigarh University) at a very tender age. Chakraborty regularly tours in India, USA, Germany, Switzerland. and the UK. He regularly teaches in London, sharing his extensive knowledge of the many teachings of Hindustani vocal music.

Dr. Ravi Rao has studied sitar with leading performers such as Pandit Krishna Bhatt and Ustad Shahid Parvez and received music instruction from his mother, Mrs. Anasuya Rao. He has played extensively in the Tri-State area and has performed at venues including the Lincoln Center, the lotus Fine Arts Center, the Museum of Natural History, the Noguchi Museum and the Rubin Museum.
He has led Wellness Workshops on the techniques of relaxation, meditation and stress reduction through music. He contributed to the CD 'Synchronicity', the documentary film 'Macho' and the CD 'Bodhisattva Mass Transit'. He performed at the WKCR Columbia University Radio Station as part of the live 24 hour Raga Festival. He has also performed for charitable causes such as World Aids Day and the World Hunger Project.
Ravi has a PhD in Computer Science and is a Professor at Fairleigh Dickinson University, New Jersey.

Polash Gomes born in a Bengali Roman Catholic family in Kolkata, India. He follows the line of the distinguished Lucknow baj. He is a disciple of Dr. Mrinal Pal of Lucknow Gharana. He also studied tabla under Pandit Swapan Chaudhuri. In 1991 he founded of Rageshree Music institute, a not-for-profit organization dedicated to the dissemination of Indian Music in the West. He has so performed with Pandit Krishna Bhatt, Pandit Ramesh Mishra, Pandit Subrato Roy Chouwdhury, Amit Chatterjee and the other Hundusthani Classical musicians.