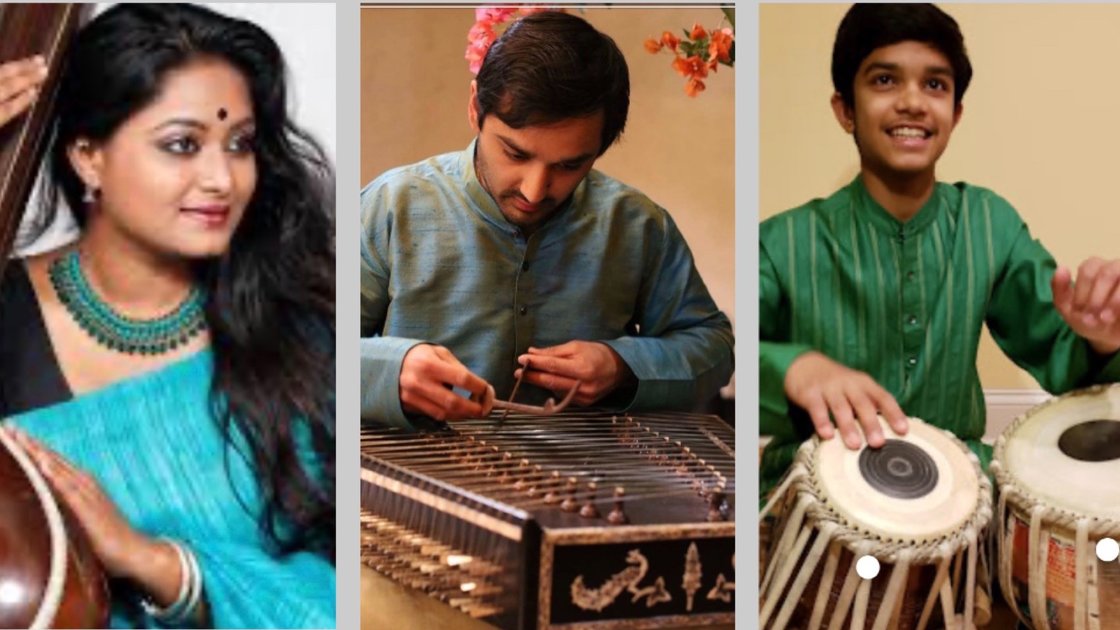 The Brooklyn Court presents an evening of classical Indian music in two parts with leading Kolkata based vocalist Rageshri Das accompanied by Rupak Mitra on tabla, followed by a performance featuring Santoor virtuoso Vinay Desai accompanied young tabla star, Vivek Pandya. We will enjoy this music event from 8:30pm (EDT) on Tuesday evening. Everyone is welcome to join. This event is free and open to all with all donations going to the artists. About the artists ++++++++++++++++++ Rageshri Das : Rageshri Das is one of the most talented singers of her generation. Born in a musical family Rageshri grew up with music. Her father Sri Purnendu Das is a vocalist (PhD, gold medalist, A grade artist of All India Radio and Doordarshan) was guided by Pandit Mahadev Prasad Mishra. Her mother Srimati Krishna Das (PhD) is also a vocalist learnt from Sri Debobrata Biswas. Rageshri started learning vocal music from her father Sri Purnendu Das at a tender age of 3. Afterwards since 1994 she started taking lessons from Guru Pandit Mohan Lal Mishra & his son Sri Deepak Mishra (Benaras Gharana). Her disciplined and rigorous taalim in Khayal, Thumri, Bhajan with her Gurus was in the traditional Guru-Shishya Parampara for the last 21 years. Rageshri is one of the well known prominent young singers in India. Her performances are well appreciated by music lovers and musicians. She is not only a successful singer of Khayal, Thumri and Bhajan but also Ghazal is one of her specialities. Her performances are on high demand across all over India and abroad. Vinay Desai : Vinay received knowledge in vocal/harmonium/tabla from Shafiq Rahman in his teens. After completing his college in both Pre-pharmaceutical science as well as Pre-Law in Delaware, Vinay sought out to learn Santoor in India. In 2011, with blessings and direct guidance of Padma Vibhushan Pandit Shivkumar Sharma, Vinay began his studies under Takahiro Arai. He later moved back to the USA to learn from Kunal Gunjal. To expand his knowledge in music, Vinay has learnt from different Maestros such as Parthasarathi Chatterjee, Jay Gandhiji, Suryaksha Deshpandejii. Now Vinay learns from Pandit Shivkumar Sharma directly. Vinay has played in several festivals in the USA such as Pandit Kashinath Bodas Festival, Kussum Mahotsav, and in India for Pandit Anindoji’s Guru Poornima festival in Kolkotta, SwarGanga in Pune, Delhi, and Mumbai. He was the first Santoor player to play in Argentina and Kauai. Vivek Pandya : Vivek K Pandya is fifteen years old. He has been learning tabla from world renowned tabla maestro Pandit Anindo Chatterjee since past nine years. Vivek was born in Long Island, NY in a musical family. Initially he was guided in tabla by his uncle Viral Pandya. Vivek was invited by late Pandit Arvind Mulgoankar ji to play tabla solo in ustad Amir Hussein Khan's 47th barsi concert in 2016 held annually in Mumbai. He has also played solos in Solapur, Pune, Mumbai, Arizona, NJ, NY and in front of Tabla faculty and students in Baroda at MS University. He was invited as a child artist under the scheme of extra mural lecture series on characteristics of Farukhabad gharana in 2015 and 2017 by the dean of MSUniversity school of music. Aside from playing solo Vivek enjoys accompaniment. He has accompanied several upcoming talented musicians and established artists. His tonal quality, clarity of bols, speed and musicality has been recognized by musicians and music lovers all around the world. Aside from tabla, Vivek loves to play tennis and excels academically.
New thread

NYC based sitar school with classes and private lessons available for all levels. https://kolkatasitar.viewcy.com

Kolkata Sitar is matching 10% of donations for this event.