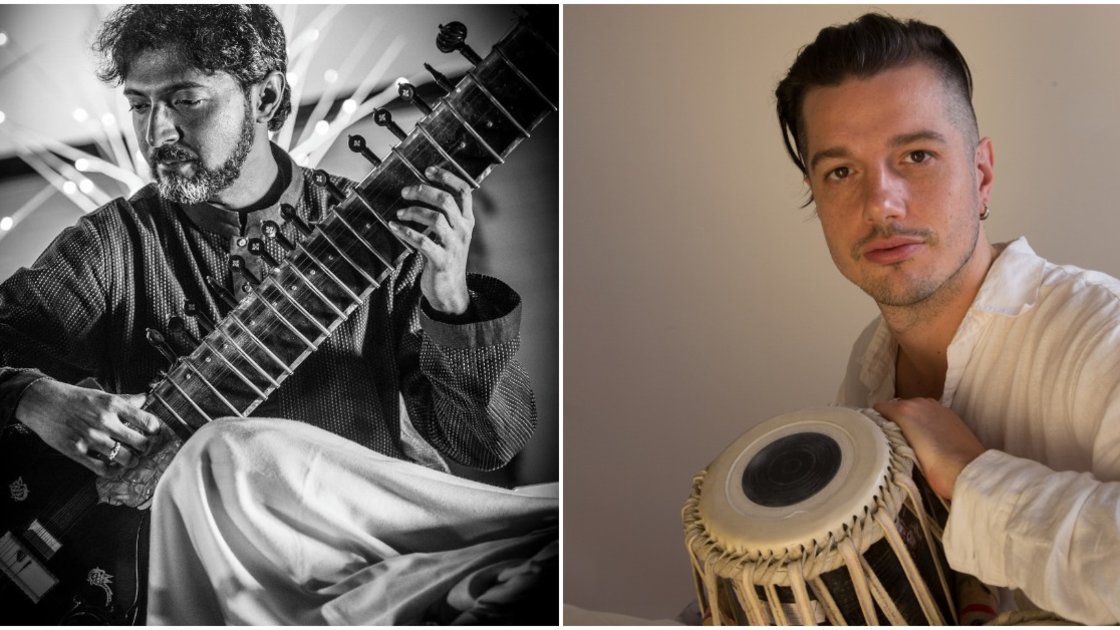 An evening of the melodious sitar of young master, Abhik Mukherjee, accompanied on tabla by Ehren Hanson, this concert is not to be missed. Founding members of Brooklyn Raga Massive, and world touring artists in their own right, Abhik and Ehren will present North Indian classical music in its pure form. Filled with spontaneous dialogue, improvisation, and imbued with devotion for the tradition, the history, and the long lineage of maestros that they represent, prepare yourself to be transported.

Abhik Mukherjee is a Kolkata-born sitar player of the Etawah-Imdadkhani gharana. He was initiated to sitar at the age of six by his father, Sri Tarit Mukherjee, and Sri Bimal Chatterjee, while simultaneously receiving vocal instruction from Sri Kaylan Bose. He has since taken talim from Pandit Arvind Parikh and Pandit Kashinath Mukherjee, themselves disciples of the legendary Ustad Vilayat Khan. He is a gold medalist in musicology from Rabindra Bharati University, Kolkata, and has also received a scholarship from the Ministry of Culture, India. Abhik currently lives in New York City and is a founding member of Brooklyn Raga Massive, an Indian classical music artists’ collective.

Ehren Hanson is professional NYC based Tabla player, director of the Anindo Chatterjee School of Tabla, and the CEO and founder of Viewcy.com. He began learning tabla at age 15 under Misha Masud in New York City. In 2000, he became a disciple of Pandit Anindo Chatterjee. Ehren went on to teach rhythm as an assistant professor at Bard College in 2002, and in 2005 he received the Senior Performing Arts Fellowship from the American Institute of Indian Studies. He has accompanied great musicians including Pandit Debi Prasad Chatterjee, Pandit Subrata Roy Chaudhuri and Steve Gorn. Ehren is the director of the Anindo Chatterjee School of Tabla in Brooklyn, NY, and is an active performer and teacher.