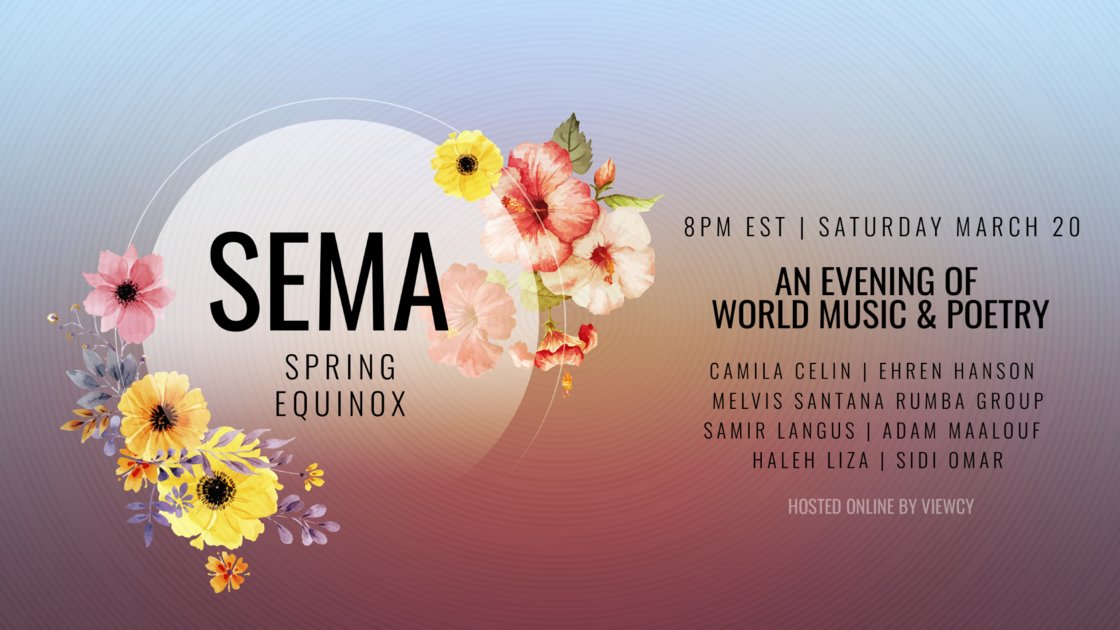 Greetings! After a long pandemic hiatus we are very excited and honored to celebrate the coming of Spring with an exquisite line up of artists that represent the unique SEMA signature.

SEMA is a collective of world musicians & artists based in NYC that fuse performance with ceremony. Each artist is inspired & influenced by ancient cultures and mystical traditions from around the globe.

Tickets will be available on a sliding scale basis, ranging from $8-28. Please pay what you can afford, keeping in mind that proceeds from ticket sales will be shared equally among all of the artists, supporting their craft during these times. There is also a free option available to those who are experiencing financial hardship.

The event will be streamed virtually through the Viewcy platform, starting at 8PM (EST).


More about the Artists:

Ehren and Camila have an intimate musical connection that spans 18 years, and 3 continents. Their music has transported and nourished audiences around the world. In NYC, they have been performing, teaching, and promoting Indian music for over a decade, and it will be a rare treat to watch these two incredible artists live.

Camila Celin began playing guitar at age nine. For twelve years, she has been doing intensive studies in the Indian sarod, currently studying with sarod maestro Pt. Tejendra Narayan Majumdar. She also studied with Shri Sougata Roy Chowdhury and Pt. Krishna Bhatt. In 2009 she was nominated for a Grammy for best world music album in collaboration with slide guitar maestro Debashish Bhattacharya. She has been an active performer in her native Colombia, the U.S., and India. Camila has composed music for several films, for theater as well as for commercials, and lives between New York City and Kolkata, India.

Ehren Hanson began learning tabla at age 15 under Misha Masud in New York City. In 2000, he became a disciple of Pandit Anindo Chatterjee. Ehren went on to teach rhythm as an assistant professor at Bard College in 2002, and in 2005 he received the Senior Performing Arts Fellowship from the American Institute of Indian Studies. He has accompanied great musicians including Pandit Debi Prasad Chatterjee, Pandit Subrata Roy Chaudhuri and Steve Gorn. Ehren is the director of Viewcy.
Haleh Liza is a poet, vocalist, translator, and educator, born in New York of Persian descent. Her forthcoming book of translations entitled GOLD features poems by the 13th century poet Rumi and will be released in August of 2021 by New York Review Books/NYRB Classics.

As a vocalist, Haleh enjoys singing in English, Persian, Spanish, and Portuguese. With her current project and past projects, Haale and The Mast, she has played venues such as Lincoln Center Out of Doors Festival,  the David Byrne-curated series at Carnegie Hall, the Bonnaroo Festival, UNC Chapel Hill, Celebrate Brooklyn, PopTech, and the World Music Fest in Chicago.

Samir Langus was born and raised in the city of Agadir, Morocco and learned Gnawa from the old masters of Morocco. Gnawa is the southern Moroccan trance music with roots in pre-islamic animist traditions. Samir Langus’ NY band uses traditional instrumentation such as the lute-like Sintir and the large castanet-type Krakebs to accompany its ancient chants, but his approach is resolutely innovative (his first band was called Innov Gnawa). It is an hypnotic, take on this ecstatic, trance-inducing tradition which has enthralled and inspired generations of musicians from around the world.

Adam Maalouf is a NYC-based multi-instrumentalist and composer. His cross-genre style of music forms a common thread between the cultures of the East and West. Maalouf’s playing style on the pantam represents the cross-pollination of diverse influences, including western classical, Jazz, Arabic, and Indian classical music and electronica. Pan-tam is the name of the "flying saucer" instrument invented in the year 2000, and the word stems from the combination of the Pan from Trinidad, and the Ghatam (clay pot drum) from South India.
Omar Aena aka Sidi Omar is a DJ and creator of the event series Dance Lab. His passion is in exploring the alchemy of sound and movement, and the healing potential that exists within them. As a DJ, he weaves together electronic sounds with traditional/organic music from various cultures around the world, with a particular focus on music from his own Middle Eastern heritage.

We hope you tune in to what will be a magical evening !