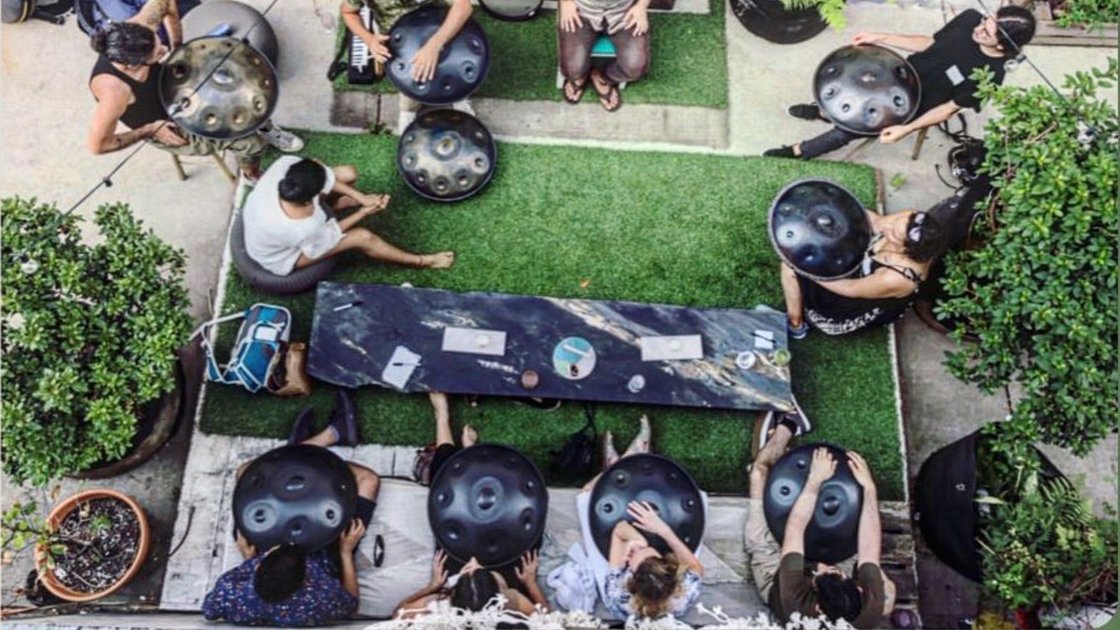 Join us November 7th for an evening of music from some of the most well recognized and promising players on the east coast!

Tickets to this event will be $20, available both online beforehand or at the door the night of the event

The Pantam Collective is proud to present;

"Jacob Cole is a world percussionist, instructor, composer, and jazz fusion drummer. He graduated from Berklee College of Music in 2006 where he studied drum set and world percussion, such as tabla, udu, and frame drums with many of the worlds best percussionists. Since 2013 he has been applying that knowledge and his depth of experience as a professional musician to handpans, tonguepans & other sonic vessels. Jacob’s unique style of playing reflects a diverse range of percussive styles and techniques he has picked up along his journey, yet ultimately it is his love for the groove, composition, & improvisation that drives his unique approach to music."

Dan Mulqueen is an American multi-instrumentalist from New Jersey. Dan's music is centered around an instrument called the "Handpan", an instrument created in 2001 in Switzerland. This instrument allows the player to create a rhythm and a melody simultaneously using only the hands.

Determined to push the limits of music revolving around this instrument, Dan's playing style is both beautifully melodic and intensely percussive. His stylistic approach invites the listener to experience elements of multiple genres of music all housed in one easily digestible format. While keeping the handpan as the center piece of his compositions, Dan's recordings also feature instruments such as upright bass, piano, electronic beats, guest vocals and more.

A New York City based composer and performer, Adam has shared his music in venues across the world including Carnegie Hall, Lincoln Center, MoMA, St. Basil's Cathedral, Tanglewood, Wolf Trap, The BANFF Center and Austin City Limits. As a collaborator, Adam has performed with ensembles such as The Brooklyn Raga Massive, Pink Martini, Ensemble Signal, The Atlanta Symphony, The National Arabic Orchestra, The Asheville Percussion All-Stars and The Gil Evan's Centennial Project, and with artists such as Steve Reich, Eugene Frisen, Kygo, Drukmo Gyal Dakini, Lizz Wright, Jamey Haddad, Farah Siraj, Morley and many others. Adam performs regularly as a solo artist and with his world music project "Future Tribe".
Adam holds a BA in Percussion Performance from the Eastman School of Music in Rochester, NY and MBA in Music Business from Berklee School of Music. After school, curiosity drew Adam to India and the Middle East to study under renowned hand-percussion masters Anindo Chatterjee, Rohan Krishnamurthy, River Guerguerian, Glen Velez.

Brooklyn based handpan/multi instrumentalist Miguel Santamaria Jr is a Colombian American musician who derives his style from exploring technical and conceptual boundaries between lucidity and improvisation.
Through personal use of entheogenic practice and over 13 years studying/playing percussion, Miguel strives to push the possibilities and application of the Pantam through the use of loop stations, throat singing, mantras, and cerebral compositions that still remain true to the playful nature of improvisation innate in us all. He currently curates and holds space with Merkabah Sound in ceremonial setting, and performs his acoustic/electronic loop based compositions under the moniker Sunsetter with Adam Maalouf.